The Mac Experience: First Impressions of My First Mac

(This is part 2 of my experience of switching over from a PC to a Mac.  To read the introduction, click here)

Once you go Mac, you never go back.  That’s what they say.

Being a bleeding heart PC user (and a bit of a skeptic in general), I had my doubts. I didn’t expect to hate using a Mac.  I simply doubted that I would be swayed from my preference of Windows.

I have to say though, Apple makes a great first impression.

The packaging for my iMac was quite impressive.  Folding open it’s trapezoid-esque box, I was greeted by a three-piece Styrofoam construct.  Nestled securely in the top was a thin rectangular box which held the wireless aluminum keyboard and mouse.

The keyboard lacked a number pad, which I didn’t mind because I never use the number pad.  The mouse, known as the “Magic Mouse”, features no visible buttons and at first glance, appears to fall in line with Apple’s traditional (and nonsensical) one button pointing devices.

It would eventually become one of my favorites pieces (but more on that later).

Finally, the rectangle box held a very lovely dust cloth with a subtle Apple logo in the corner.  Now that I had the accessories unboxed, it was time for the main event.

Sliding the Styrofoam off piece by piece, I made my way to the still shielded iMac.  Between the clear plastic wrapping around the base and the cloth-like screen cover that fit perfectly around the rest, I had no doubts that my computer wouldn’t have so much as a smudge on it.

Like a bride that remains veiled until the pronouncement of her marriage, this Mac had been saved for me, and me alone.  I felt obligated to handle it as delicately as possible as I removed the rest of the wrapping.  A few minutes later, the all-in-one unit sat before, ready to be used.

Its simplicity serves it well.  I was surprised at how thin it was.  Even for a computer with no disk drive, it seemed remarkably compact.  And with only a power cord to plug in, the computer left my desk feeling surprisingly clutter free.

So far, the Mac and I were off to a good start.  I was ready to turn it on.

Let There Be Light and Sound and Stuff

With a push of the practically hidden power button, the screen flashed a blazing white light as its unseen speakers let out the infamous Apple “startup chime”.  Am I the only one that thinks of Jurassic Park every time I hear that?  Anyway, the mouse and keyboard quickly synced up with the system, giving me the ability to finish the setup.  The rest of the process was very painless and took about half as much time as unboxing the computer did.  Before I knew it, I was greeted by the default OS background and the beauty of the Retina display.

Beauty and the Beastly External Monitor

By that I mean I felt very removed from the process as a whole (which I had mixed feelings about).  I also don’t really get the purpose of dragging the icon into the “Applications” folder, but whatever.  I had my programs and everything worked fine.  Time to plug in the external monitor.

First I had to plug the HDMI cable into the thunder adapter, which then plugged into the Mac.  Apple and its proprietary ports.  Why my four-year-old HP laptop has an HDMI port and my brand new iMac doesn’t, I’ll never understand.

Anyway, I turned on the monitor to discover that it looked like garbage.  The background image was fuzzy, text was blurry and almost unreadable in spots.  Sitting next to the Mac’s Retina display only made it worse.  I was very confused because I had just had this monitor running off my laptop the day before, and it looked glorious.

Fixing Blurry Image and Text on a Mac’s External Monitor

To make a long story short, apparently the latest Mac-OS thinks that quite a few monitors are TVs and sends them the wrong video single.  To correct this, I had to download a script, use terminal to run the script, create an override folder, force my Mac to show me my system files, and place the override folder into the system files.

Seeing as I don’t know Mac infrastructure at all (it’s like they try to hide everything from you), I had to look up how to do every step along the way.  If you find yourself with a similar issue, this is what I used to fix it (click here).

I ended up fixing this issue for everyone else in the office too.  Is it weird that I, the resident PC guy, had to fix our offices Mac problem?  A little.  But I least I learned a lot along the way.

And that was basically my first experience with my own Mac.  We got along pretty well, but I’m not sure I’m ready to hold hands and stuff.  Once everything was running, it just felt like a computer.  Sure, the layout is different, and it has this dumb “command key”, but otherwise it felt pretty familiar.

I would imagine it’s comparable to driving in Europe where you’re on the left side of the road and everything is metric. I suppose I can handle that.

Comeback for the final Mac Experience post where I layout my full list of Mac Pros and Cons.

Did you expect a bigger reaction? Should I have started bowing down before my iMac? Does the Apple startup chime make you think of Jurassic Park?

5 Responses to "The Mac Experience: First Impressions of My First Mac" 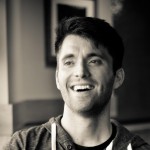